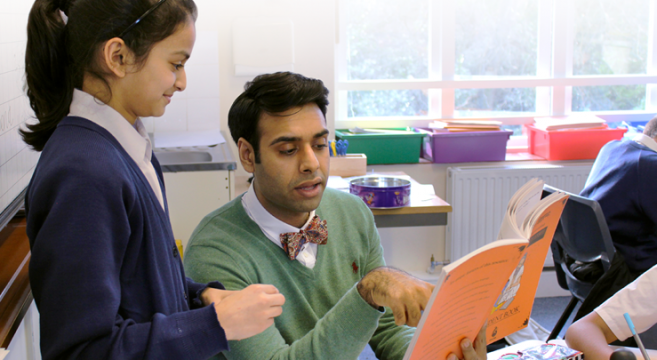 Our interview with Jay Laxman (see ‘Jay’s Journey’ on page 2) has only scratched the surface of this charasmatic character. So where better to start than at the very beginning…

Have you always wanted to be a teacher?

No. I did a BA in Classics – learning about the Greek and Roman civilization, including language and philosophy, and I loved it. In my last year they said I could do a floater unit course, because UCL is connected with SOAS. So I went to SOAS in Russell Square for the Sanskrit course. They told me it would be very difficult, despite having Greek and Latin behind me, but I got a first! I wanted to go on to do a Masters, but was told I couldn’t because I’d only done a small unit in Sanskrit, but I could study Hinduism with Sanskrit. But I wanted to focus on the Sanskrit, so I did a two-year diploma course instead.

For my first year, again I got a first. So they said “you know what – forget that. Just do the Masters” and I loved it – learning all the grammatical rules, reading different scriptures from different eras; we looked at Classical Sanskrit, which is what most people do, but then we looked at Vedic Sanskrit, which is pre-classical. I really fell in love with it; doing my theses on the Yajur Veda (which is a good example of Vedic Sanskrit).

What’s the difference between Classical and Vedic?

Some words are pronounced differently. There are some metrical rules (involving accents, meaning you speak in different pitches) and grammatical rules which are different. Also the meaning of certain words can be different, so it’s quite interesting. But there’s something about the Vedic Sanskrit that get’s you thinking, “wow, this is what the Aryans used to speak, and for chanting all those mantras for sacrifices” so there’s something quite mystical about it! The Yajur Veda is a very old scripture that explains these sacrifices, giving instructions for priests, like, “now the priest picks up this spoon and picks up the ghee with it” and reading this for the first time, I was like, “oh my gosh!”

There are six different versions of the text, but no original in existence, so my argument was that originally there was only one, so I produced a concordance of the six, matching them all up to create a version that I could present, saying “I think the original would have looked like this”. My lecturer was really impressed and asked me to go on to do a PhD. But I can return to do that anytime. Instead I thought, “enough of being broke – it’s time to get a job!”

It’s the curse of the student! Did you work while studying?

Whilst studying I worked for John Lewis Oxford Street in the furniture department as a sales assistant – loved it. I was there for 8 years, always part-time. It really taught me professionalism, amazing customer service, how to present myself, skills I’m still using with the kids.

Once I finished my Masters I didn’t know what to do. I thought about teaching as a way to use my languages but didn’t want to risk doing a PGCE at that time. At John Lewis I moved to visual merchandising and window dressing for the Food Hall. At Christmas I’d have budgets for going crazy with the displays, like £10,000 for champagne from Waitrose. It was so much fun, people tapping on the window while I was working; it felt like my own stage!

I considered working for schools in India, but then heard about Krishna Avanti Primary School, so I came in to speak with Sandra Clarke, who was in charge of Philosophy & Ethics at the time. She was impressed with my background and invited me to volunteer, teaching Sanskrit to Year 2, the oldest class at the time.

Had Sanskrit been taught at the school prior to that? Two Brahmanas (priests) from the Bhaktivedanta Manor temple had taught them some Sanskrit letters, but that was all.

So you had free reign, a creative license to build your own curriculum from scratch? Yes, but it was really hard at first. I started out thinking “Maybe I’ll do it like this or maybe like that” but Sandra had a very specific way of doing things, “this is how we do it, this is the text we use, it has to be comic sans, for marking you have to use this colour pen, the date has to be written like this… “ I was like “what is a WALT? What is a WILF? We say Learning Objective” but this was my training.

I later took a part-time job for a while, but when Avanti House advertised for a teacher, I applied and was given the job. This was my chance to really start teaching Sanskrit at a higher level, so I had to think really hard about how this should work, so we got in touch with Prana in New Zealand from Goloka Books. His resources for Sanskrit were good but we also needed resources that would take the students to GCSE level.
I’m good friends with the Head of Sanskrit at St. James School, Kensington and we’ve been able to use their syllabus which I love. This brings them to the Cambridge University International GCSE paper, which has more value than the standard GCSE.

Were St. James the first to develop a Sanskrit syllabus at this level?

Yes I think so. They have been teaching Sanskrit for over 20 years now I think. So with the lessons learned from St. James, working with the staff at Avanti House and the experience I’ve gained teaching there, my PGCE – with all this behind me, I’ve started writing my own schemes of work, my own level descriptors, how lessons should run, the plans, I’ve had my NQT teaching with Jo Quelch, which was great, and that taught me about differentiation, assessment for learning – so you know what, I really feel like things are taking shape, and the subject is gaining recognition, not as part of Modern Foreign Languages, but as Ancient Language, which is much more accurate, as Sanskrit works so differently. So we have our GCSE, now it would be nice to get the A-Level in place, so our students can take it further, to SOAS for example, which is a great place.

You’re breaking ground here, which must be exciting, whereas if you were teaching at St. James, you’d be fitting into an already created structure.

I like that I’ve been able to take my own journey. It’s a real learning experience, getting to know why we should do this, or why we shouldn’t do that. And the kids seemed to have enjoyed it.

How similar is the curriculum at Avanti House to what is taught at St. James?

Eventually it will be the same, but their kids have been learning Sanskrit since Reception, so I’ve got a lot of extra work to bring my Year 8’s to where they need to be. Luckily, St. James have also created a crash course book, learning the Deva Nagari script in one term, then the grammar that is usually taught over five years in two terms, which is amazing, but it means it’s a lot of work from my side and for the kids. Lots of homework, and lots of concentrating!

At Avanti House, is Sanskrit a compulsory subject after Year 9?

No it’s an option, so I’m competing with a lot of other subjects after Year 9! Fortunately, the kids here enjoy my classes, but I have to remind them “The subject is hard, so do it because you want to learn Sanskrit, not because you want me entertaining you at the front of the class!”