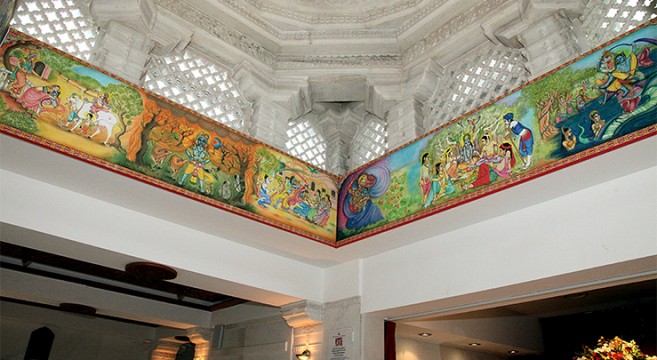 The temple with a tale to tell

If you’ve ever visited the Krishna Avanti Primary School in Harrow, you would have marvelled at the white marble temple that graces the inner courtyard. Within the shrine, upon an intricately carved altar, you’ll find gorgeously decorated deities of Krishna and His eternal brother Balarama. If that weren’t enough of a visual treat, cast your eyes upwards, where the story continues.

Avanti schools share a special ethos, rooted in the teachings of Chaitanya. Over the centuries, these teachings have often been relayed by means of storytelling; the most popular speaking of Krishna’s charmed childhood in Vrndavana, India.

Despite its impressive architecture and serene atmosphere, a visit to the school’s temple may still leave one confused as to who Krishna is and why is he worshipped? The recently installed artworks, commissioned by Nitesh Gor and created by local artist Emma V. Moore offer colourful insights into the life and times of Krishna, and why his devotees find him so delightful.

Below,  you’ll see the four murals, depicting a total of twelve much-loved scenes from Krishna’s pastimes plus a concise outline of the story written by the artist.

A long time ago, in a faraway land…

Whirled Away!
Wicked King Kamsa sent many demons to destroy Krishna, who he knew to be no ordinary boy. One of these appeared as a great whirlwind, lifting the baby boy into the air and carrying him far away from Vrindavan. Krishna held onto the neck of the whirlwind demon who fell like a stone to the ground and died.
The Company of Dear Friends
Under the shade of a beautiful banyan tree, Krishna sits with his brother Balarama and their friends, eating the delicious food prepared by their loving parents. The cows are happy in their pasture, and there’s just enough time to enjoy the exchange of stories and jokes, especially those of the funny brahmin boy, Madhumangala.
Defeating Kaliya
The river Yamuna once turned black with poison because of the terrible, many-headed snake named Kaliya. Krishna danced on the heads of the snake, who quickly began to die. Fearing for the life of their husband, the wives of Kaliya prayed to Krishna to spare his life. Kaliya was banished far away from the land of Vrindavan, and the river became crystal clear once again.

Krishna Is No Ordinary Boy
Like all small children, little Krishna loves to put things in His mouth! One day, his mother caught him eating mud. As she looked into the mouth of her son, Mother Yashoda saw the whole universe. Realising that her son was the Supreme Lord, she fainted with surprise, but Krishna made her forget this and she awoke, remembering nothing.
Two Naughty Brothers
Krishna and His brother Balarama can’t resist the delicious butter the gopis make and hang in pots from the ceiling. Because Krishna is only a small boy, he breaks the pots by throwing stones. Believing themselves unseen, He and Balarama eat the butter and feed it to the monkeys and crows.
Two Heavenly Beings
When mother Yashoda catches Krishna stealing butter, she ties him to the wooden grinding mortar. Krishna cries a little, but then crawls out of the house, dragging the mortar along with Him. The grinding mortar gets stuck between two trees and as Krishna pulls, the trees fall down and two heavenly brothers, cursed long ago to become trees, are now freed.

Transcendental Dancers
In the secret, moonlit groves of Vrindavan, Krishna and the gopis (cowherd girls) perform the ‘rasa’ dance. Krishna moves swiftly between each gopi, who believes that she alone is Krishna’s dance partner. The night is filled with the sound of ankle bells and the expert musical talent of the beautiful gopis.
Radha and Krishna
Radha is the most beloved gopi of Krishna. She is the most beautiful among the cowherd girls and knows well how to enchant Krishna with her expert singing and playing of musical instruments.
A Circle of Beloved Friends
Krishna loves to meet with his beloved Radha and her gopi friends. The gopis seen here are known as the ‘astasakhis’ (eight friends) and they are the most confidential associates of Radha and Krishna, assisting in the meeting and pastimes of the divine couple.

Coming Home
Krishna is a cowherd boy in the beautiful land of Vrindavan. Along with his friends the gopas (cowherd boys), Krishna takes the cows out to pasture every day and brings them back as the sun sets. At this time, Krishna’s mother and father and his brother Balarama greet him with hearts full of joy.
A Terrible Fire!
In His wanderings through the forests of Vrindavan, Krishna once saw that a demon had created a terrible fire which was rapidly destroying everything in its path. In a majestic display of power, Krishna opened his mouth and breathed the fire into His own body, saving the lives of the forest’s many animals and birds.
Throwing Colours
During the festival of Holi, Krishna and His friends like to throw coloured powders at the gopis. Never to be defeated in any transcendental game, the gopis throw colours back and the villagers look on with amazement at their beauty and playfulness.
Pin It
Previous post:
Down-to-Earth Dialogue Next Post:
Reflective Reading