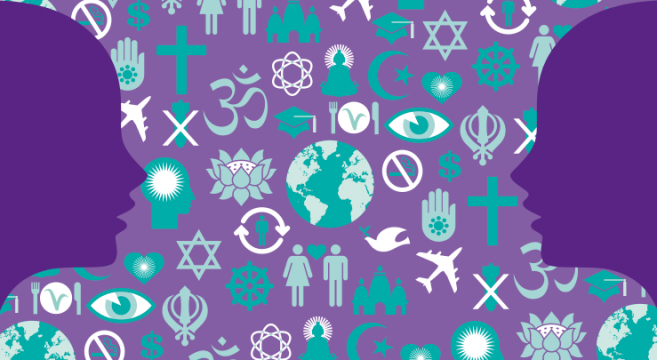 In the following extract from an essay by Dr. Graham M. Schweig, we take a closer look at ‘faith’. Can religions claim a monopoly on something we all possess? And if we adhere to a tradition, what do we gain by discussing our faith with others?

When we speak of a dialogue that is specifically one of “interfaith,” such as “interfaith dialogue,” then it is important to appreciate that this is a special kind of dialogue in which the words exchanged are not just any words, but words of faith.

Here it is important to affirm a simple, working understanding of what is meant by the word faith. The word can, of course, refer to the particular vision of the divine and relationship with the divine espoused and cultivated by a particular religious tradition in which a community presumes to share a common faith. In this context, the word faith refers to a specific shared vision of ultimate reality and thus the word can be found in the plural, since there are many such shared visions in the many traditionally defined faiths of humans. And as a member of a religious community or tradition, one can identify with a particular faith, and the faith of an individual is reinforced, cultivated, and strengthened by its connection with a shared faith of other individuals. But from an understanding of bhakti, this understanding of faith is epiphenomenal in relation to the more basic, ontoexistential level of what faith originally is.

Faith is an irreducible and universal quality of human existence and each individual human being. First and most fundamentally, and indeed ultimately, faith is a matter of what resides most deeply within any individual or single person’s heart. Whether a person claims to be a member of “a” faith or religious tradition or spiritual path, or whether a person claims to be a nonreligious humanist or a proclaimed atheist, whatever the collective faith with which one may identify, faith is first something more basic, and something that every individual possesses. It is something inborn and intrinsic to human nature, it is something that proceeds directly from the deepest recesses of the heart.

In Sanskrit, the word śraddhā is most commonly, and perhaps most appropriately translated by the English word “faith,” because in Sanskrit the word etymologically breaks down as meaning “where one places (-dhā) one’s heart (śrad-).” This definition speaks to the universal quality of faith as something that cannot be claimed merely by religion. It is intrinsic to each and every human being, it is what motivates all human living, and it is what constitutes what is most important to humans everywhere. It is what is at the very core of a human. 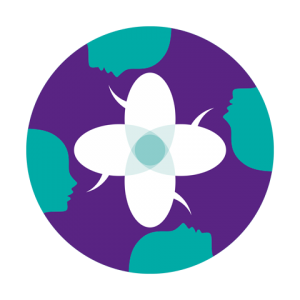 “No one person’s faith is exactly like another’s, thus dialogue is as important within a tradition as it is between traditions”

On the other hand, faith is intensely personal and individually formed and shaped. It is what each of us most ardently desires and loves, what each of us most passionately believes, and what each of us trusts as a totally embracing vision of reality. While faith is a universal quality of human being, each person’s faith is unique and individual because each person, according to bhakti theology, is an eternally constituent infinitesimal part of supreme being. And therefore even if a person is a member of a particular faith tradition, his or her participation in a shared faith will still be uniquely shaped and formed.* Ultimately no one person’s faith is exactly like another’s, inside a shared traditional vision or outside. Thus dialogue is as important within a tradition as it is between traditions. Often practitioners become too comfortable with one another due to false assumptions that the heavily binding doctrinal adherences among practitioners automatically achieve an identical faith among members of a tradition. This relaxed notion among members ironically often eclipses dialogue within a tradition.

Over the years of experience I have had in interfaith forums, I often get the impression that there is an assumption in the minds of partners in interfaith dialogue that they are to strive to discover similarities or commonalities, and to get away from differences. I have also seen that the discoveries of what is assumed to be similar or even identical ways of thinking or experiencing the religious life somehow gets higher praise or appreciation than the differences. Moreover, these apparent similarities often point us to deeper differences and uniquenesses between traditions. Exploring and comparing similarities and differences within dialogue is natural. However, I would argue that this comparing is not ultimately the point of dialogue. Rather, it is the dialogue itself that is the goal. It is the sharing that takes place within dialogue that is the achievement, and this sharing should not be eclipsed by assumptions of similitude when there is a mutual exploration of faith through dialogue.

Many Truths of the One Reality, Sat

There is a well-known, much celebrated Hindu adage. It is often engaged as a Hindu way of understanding the diversity of religious traditions in the world. This adage is often worded in the following way: “Truth is one. Paths are many.”** Another rendering of this adage goes like this: “Truth is one. Sages call it by many names.” And there could easily be variations of either of these renditions.

What is important to note here is the essential message most likely intended by these types of renderings: There is something that unifies human beings in their many ways (as in “paths are many”) of grasping the one ultimate reality (as in “truth is one”). A more precise or strict translation of the original source of these sayings, which is originally located in the Vedas, reveals this very intention quite clearly:

There is one (ekam) Reality (sad)
about which vibrant persons (vipra)
in various ways (bahudha) speak (vadanti).***

Clearly differences between the popular renditions of this passage and the direct translation that I provide here are obvious. For example, no words such as “names” or “paths” exist in the original Sanskrit of this passage. But the intention, I believe, is to be expressing what the passage says most literally. Thus from the earliest sacred writings of India one finds this wise vision that has certainly been a powerful influence on traditions typically grouped under the umbrella term, Hinduism. And included in that group would obviously include the Chaitanya school of Vaishnavism.

This Vedic passage presents essential components for setting the stage for dialogue and the revelational gifts that can come from it:

1There is “one reality” in which we all find ourselves, no matter what our faith orientation may be. Everything exists together in this one totality of reality no matter what religious truth we may hold as absolute, whatever we believe or claim as truth – or that which is closest to our hearts. Whatever exists is contained within this “one reality” which, in Sanskrit, is ekam sat.

This experience can consist of:

3Following from such an experience, persons are moved to share what has so deeply moved them or inspired them by “speaking” about that divine relationship with the one Reality that constitutes their “the absolute truth.” Speaking about the absolute truth to whom?

These inspired persons share through dialogue their experience with either:

4The fullness of the one reality is such that there is no end to the experiences that such inspired persons can have of it, and thus the “various ways” of speaking about their relationships with the one Reality are endless.

Partners in dialogue will utilise whatever ways can best express this ultimate relationship. Each way of expressing it is unique, whether it be within a tradition or between traditions. And what is implied here is that the more such inspired or vibrant persons share with one another their experiences of the one Reality, the more that this very sharing itself through dialogue becomes the special way of uniting human hearts. What will invariably emerge between partners in such a dialogue is the special kind of revelation of the one Reality that cannot be found anywhere else. The Rig Vedic passage thus reveals the unique form of revelation of the one Reality that should be the very basis of dialogue and the very ground on which a genuine religious pluralism is built, and further, expresses an interfaith ethos that forms a foundation on which the Chaitanya school’s vision of dialogue and bhakti rests.

* Even during the course of one’s life, scholars in the object relations school of depth psychology have shown that even during a particular lifetime, a person’s faith is always changing and growing in ways that correspond to the natural developmental phases of the psyche. See The Birth of the Living God: A Psychoanalytic Study, by Ana-Maria Rizzuto, M.D. (Chicago: University of Chicago Press, 1979).

** One of the most celebrative presentations of this Vedic adage can be observed at Satchidananda Ashrama, Yogaville, founded by Swami Satchidananda in Buckingham, Virginia, where he built the Light Of Truth Universal Service (LOTUS) temple that celebrates all religions. This Vedic passage is prominently displayed there and appears in the literature of the sect.